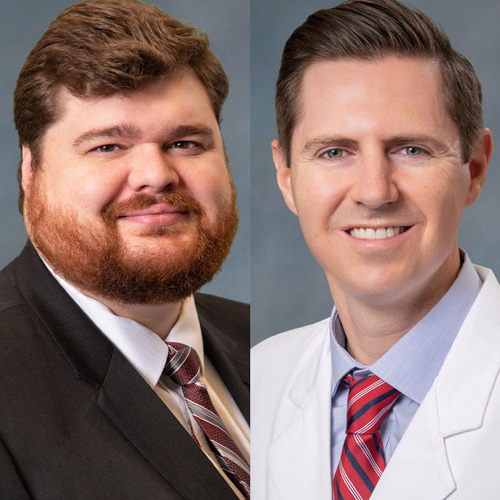 On November 15, we are joined by Drs. Michael Kemper and Stephen Overholser of Georgia Urology.

Dr. Michael Kemper graduated with a Bachelor of Science in molecular biology from the University of Michigan. His lifelong desire to follow in the footsteps of his physician parents found him receiving his doctor of medicine from Albany Medical College. Dr. Kemper completed his urology residency at the Medical College of Georgia at Augusta University, and his fellowship in sexual medicine and men’s health at Nova Southeastern University.

He is a member of the Sexual Medicine Society of North America, the American Urology Association, and the Society of Urologic Prosthetic Surgeons. Dr. Kemper is an experienced researcher, has co-authored various publications, and has made numerous presentations at professional conferences throughout the country.

Dr. Kemper specializes in lifestyle urology, including erectile dysfunction, incontinence, and enlarged prostate (benign prostatic hyperplasia). He focuses strongly on penile prosthetics and erectile dysfunction restoration surgery. “I enjoy the surgeries,” he says, “and the patient population is great to work with. At the end of the day, you’re providing a service that makes people’s lives better. I’m so fortunate to be able to do something I love everyday.”

In his spare time, Dr. Kemper enjoys reading, watching professional and college basketball and football, cooking, and going for walks with his dog, Bear.

His military medical officer career proved colorful, including serving as a battalion surgeon in Guantanamo Bay, Cuba, working as a urologist at a military hospital in Rwanda, East Africa, and serving as chief of urology at Womack Army Medical Center, Fort Bragg. Dr. Overholser ended his military service with the rank of Major, having received numerous awards and decorations, including the Meritorious Service Medal.

Dr. Overholser is a member of the Association of Military Surgeons of the United States; the American Medical Association; the American Urologic Association; and the Society of Government Service Urologists. He served as an assistant professor at the F. Edward Hébert School of Medicine at the Uniformed Services University of the Health Sciences. Additionally, Dr. Overholser has co-authored many publications, participated in several presentations at professional conferences, and worked on various research projects, including a multi-institutional collaboration to develop fully autonomous surgical robotics.

“I was drawn to urology, because of the relationships you form with patients,” he says. “Many of the people you’re seeing you know by name, you know their families, and you know their stories. You get the opportunity to work with them for years, and that type of kinship is pretty awesome.”