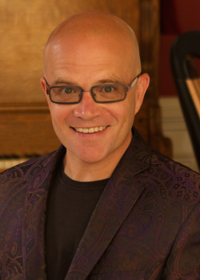 This week, guest host and entertainment journalist Jon Waterhouse checks the pulse of Georgia’s booming film and TV industry. Special guests from the behind-the-scenes world of movie and television production visit the studio to talk about the future of Y’allywood.

This award-winning Hollywood prop master is one of the best in the business, and has spent the past 30 years making movie magic. He’s created some of the most iconic props in contemporary film, including Iron Man’s chest piece in the “Iron Man” films, the phaser gun in J.J. Abrams’ “Star Trek,” and other superhero props, including Thor’s hammer and Captain America’s shield. Some of his most recent work can be seen in the first blockbuster of the summer, “Guardians of the Galaxy Vol. 2.”

Call them Atlanta’s voice over power couple. Video game fans might recognize Bob’s voice as Balrog, the massive bruiser from the “Street Fighter” series, or Odin in “Smite.” The list rolls on, and the same goes for his Japanese animation TV credits with “Dragonball Z,” “Full Metal Alchemist” and “Samurai 7” among them. September is the voice of the Amazon Kindle Fire. And she does commercial voice over work for mega brands such as Subway, Michael Kors, Mary Kay and many. And pop stars have even heard her announcing live at the MTV Video Music Awards.