This week we’re joined by Dr. Hamilton Williams of Radiation Oncology of Atlanta. 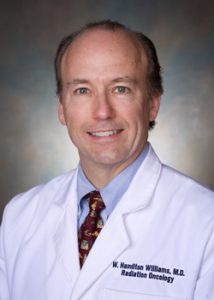 Dr. Hamilton Williams is a native of New Orleans, LA. He attended the Tulane University for both undergraduate and medical school, completing in 1988. He additionally holds an advanced degree in Physiology from Temple Medical School in Philadelphis, awarded in 1984. Following a post-doctoral residency fellowship year in Surgery at Columbia University Hospitals, St. Luke’s/Roosevelt Medical Center in New York, he completed his Residency in Radiation Oncology at the Downstate Medical Center, New York, where he was elected Chief Resident by the faculty. Dr Williams is a member of the American Society for Therapeutic Radiology, Oncology and Physics (ASTRO), the American Society of Clinical Oncology, and several other professional and civic organizations.