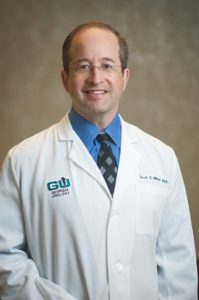 Throughout his career, Scott D. Miller, MD has been led by one consistent philosophy: focus solely on patients’ special needs and perfect the techniques necessary to deliver the best possible care.

In adhering to this creed, he’s been nationally recognized by numerous colleagues, media outlets and patients for his achievements and excellence in care and surgical innovation. As a result of his continued diligence, Dr. Miller now serves as Georgia Urology’s director of Laparoscopic and Robotic surgery, minimally invasive surgical procedures that allow for less pain, minimal post-surgery complications, and quicker patient recovery.

Dr. Miller’s work in urologic laparoscopy began when laparoscopy was still a developing practice in the United States. After graduating from the Medical College of Georgia, he completed his urologic residency at the University of Kentucky Medical Center; one of the first residency programs to adopt and embrace advanced urologic laparoscopy techniques. This extensive training endowed him with the expert knowledge necessary to begin his career of firsts right here in Atlanta.

A great deal of his work is also devoted to the treatment of prostate cancer patients and raising prostate cancer awareness. He is the founder and president of ProstAware, an organization dedicated to educating the Atlanta community about prostate health and how everyone can get involved in the battle against prostate cancer. Dr. Miller is also a regular guest host on The Weekly Check-Up radio show, where he brings together guests from various healthcare fields to provide tips that help listeners lead better, healthier lives.

Dr. Miller has been board-certified by the American Board of Urology since 1997 and continues his professional development today through active membership in societies such as the American Urological Association, the Society of Laparoendoscopic Surgeons, and the Endourological Society. He’s also received a number of awards for medical excellence from several groups and publications, including Top Doctor by the U.S. News and World Report and Top Doctor by Atlanta magazine and established healthcare research company Castle Connolly. Additionally, he is continually committed to the education of others through peer-reviewed journal and book chapter publications, hands-on teaching, and scientific presentations.

When not at the office, he is an avid songwriter and guitarist who loves spending time with his wife, Mindi; his daughter, Allison; and his son, Eric.

Recently diagnosed with a condition of the bladder, kidney, or prostate? Minimally invasive surgery may be an option for you. Click here to learn more.