This week, we’ll discuss the intersection of health and the law—including personal injury cases—with Charles McAleer of McAleer Law. 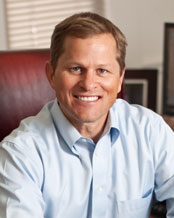