Will Draper, DVM, better known as "Dr. Will," is a well-known small animal practitioner in the Atlanta, GA area. He grew up in Inglewood, CA before enrolling at Tuskegee University in Alabama (fourth generation) for both undergraduate and veterinary studies. After receiving his veterinary medical degree in 1991, he started practicing in Atlanta and eventually started The Village Vets practices in 2000.

In 2007, Dr. Will and his team opened Georgia’s first AAHA-accredited small animal after-hours emergency facility, Animal Emergency Center of Decatur. He and his AAHA (American Animal Hospital Association) accredited practices have been consistently honored by Atlanta magazine as "Best Vet" since 2004. He was also recently honored as one of Atlanta’s FIVE STAR Veterinarians.

Dr. Will has appeared on many local news stations, as well as CNN. He has also had his own radio segment, "Critter Chatter," on 92.9 Dave FM’s Morning Show with Mara Davis. He is on the board of the Georgia Veterinary Medical Association and is active in many community and pet rescue organizations. He presently serves as a veterinary expert in WebMD.com’s Pet Health Community.

Dr. Stacy of The Village Vets

Dr. Stacy was honored as one of Atlanta’s "Best Vets" in the Nov. 2010 issue of Atlanta magazine – her third consecutive honor in the publication. She was also selected as a FIVE STAR Veterinarian in that same publication – an honor bestowed to only 7% of the veterinarians in the metro Atlanta area. 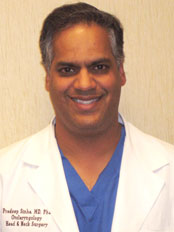 Dr. Sinha specializes in surgical, laser and non-surgical aesthetic procedures for the face and neck. Our specialization and focus on facial rejuvenation allows us to offer an unprecedented level of expertise and the latest, most advanced plastic surgery and laser procedures for you.