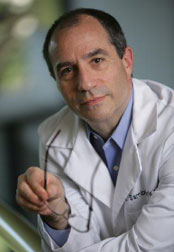 Dr. Angelo Sambunaris, M.D. is the Medical Director of the Atlanta Institute of Medicine & Research and is a nationally known expert in the treatment of anxiety, depression, and insomnia.

Dr. Sambunaris began his career as a medic in the U.S. Army and continued to serve in the U.S. military and uniformed services in various capacities for almost 20 years. His last post was as a Lieutenant Commander, U.S. Public Health Service, performing a research fellowship at the prestigious National Institute of Mental Health (NIMH), Washington, D.C.

His undergraduate and medical degrees are from the University of Colorado. He completed his residency in psychiatry at the University of Colorado Health Sciences Center in Denver, Colorado. Dr. Sambunaris also completed an externship at the Colorado State Hospital in Pueblo, Colorado as an attending physician in psychiatric services. After two years as a research fellow at NIMH, Dr. Sambunaris moved to the private sector but also served for two years as staff psychiatrist, Connecticut Mental Health Center and Yale University, Department of Psychiatry, New Haven, Connecticut.

Dr. Sambunaris worked five years in the pharmaceutical industry as a clinical research physician in neurosciences. He directed psychiatric research for Bayer Pharmaceuticals and Solvay Pharmaceuticals in the areas of anxiety and depression.

Dr. Sambunaris moved to Atlanta in 1996 and founded the Atlanta Institute of Medicine & Research in 1998. He has been a principal investigator in over one hundred research studies in the treatment of anxiety, depression, insomnia, and alcoholism as well as research in adult ADHD, smoking cessation, migraine headaches, and personality disorders.

He has appeared on radio and television as an expert on psychiatric research, research ethics, anxiety, depression, and insomnia. Dr. Sambunaris has published six papers in peer-reviewed journals and has made twenty-one presentations to meetings, symposia, and collegia of his peers. His insights into the individual and social aspects of these disorders and his common sense approach in explaining them have made him a popular public speaker around the country.

Dr. Sambunaris is married and has two children. He resides in Alpharetta, Georgia.

The Atlanta Institute of Medicine & Reseach has two facilities in the Atlanta metro area, at Perimeter/Dunwoody and Marietta.